Here is a transcription on Raag Shuddh Sarang in Ektaal. This was from a performance by Pt. Rupak Kulkarni (bansuri) and Pt. Mukundraj Dev (tabla) at the show “Art and Artists”, it is on YouTube for free, and this particular recording is streamed below (please scroll down to play it!).

Coming from a Jazz background, to me one of the most natural and maybe also most complete ways to learn music is through transcribing & copying lines from Master Players, then analyse them and start to use those in variations when improvising.

By doing this one can learn a lot of technical and musical aspects also, but more important, we learn from the music directly in a very natural and organic way, building up vocabulary just like learning a language.

This example we can also use for Online Bansuri Lessons.

Notes on the transcription:

This is the beginning of the Gat, the part in a classical performance where the rhythmic cycle, the Taal starts. The first line Rupakji played is a variation of the Bandish, and it serves as a pick up for the Taal. The tabla comes in right on the Sam of the first Ektaal, where this “pick up phrase” ends on Ni.

The tabla plays alone over the sustaining Ni for one Ektaal, then the plain Bandish starts on the Sam:

Here the tabla player improvises a kind of “intro solo” of the Gat.

This is very typical in the common format of a Raag presentation in the Hindustani Music Traditions: the tabla starts with free improvisations while the melody player sticks to the plain bandish, and only when the tabla player ends his first solo and turns to the plain Taal (which is the 12beat Ektaal here), then the melody player will start to improvise. This we can clearly hear in this performance at 2:20, where there is the main tabla solo over the Bandish.

So far at this point, as this presentation is so brief, we had only a little bit of tabla solo right after the pickup for two cycles of Ekaal. In a full evening presentation of a Raag this can go very much longer than in this example, obviously this performance was intentionally quite short to suit the circumstance of this TV show (I guess …).

Nevertheless, I’d say the two artists here did this in a very tasty manner, giving us the opportunity to experience the main principles very quickly.

This we can consider the beginning of the improvisation (blue), and to keep it short and brief, immediately in this first Taal of improvisation Rupakji already introduces a first Tihai: “NS RM P *S N” (black).

This Tihai naturally leads directly back into the Bandish:

Here again we can mention that this is very typical. Tihai can be used at different times, and a skilled tabla player might choose to pick it up and follow it as well in his playing. At the end of a performance there also will be a Tihai, sometimes a more complex one. But the end Tihai can also be very simple, only they need to serve the highest energy, as the ending always is the climax as well.

Next we can hear a second line (blue), and this one is kind of corresponding to the first one, again leading into another Tihai and the Bandish.

This is only a small piece of this Gat, it is totally worth to work through the whole thing, but so far we have already some methods and also vocabulary that we can pick up to use.

When you listen to the whole Gat you can realize that similar Tihai are used again and again, and that the energy level will rise, also the tempo will rise up. To serve this development, techniques like fast Gamak and intense tounging are used.

As the energy rises, both of the players also start to improvise simultaneously.

The climax in this case then is one of the most simplest, but also most energetic: after using a lot of virtuosity in the last lines, Rupakji turns to the pure Bandish, but without the sustaining Ni, so it lasts only one Ektaal, instead of two when played the normal way as the Bandish.

Rupakji introduces this method already in the last section of the improvisation, and then in the end again, precisely targeting the final Sam together with Mukundrajij on the tabla, rounding up this final gat.

The recording is below, and here the link to the two Master Players we just enjoyed:

Here the downloadable sheet.
Click on the picture and save it with your browser: 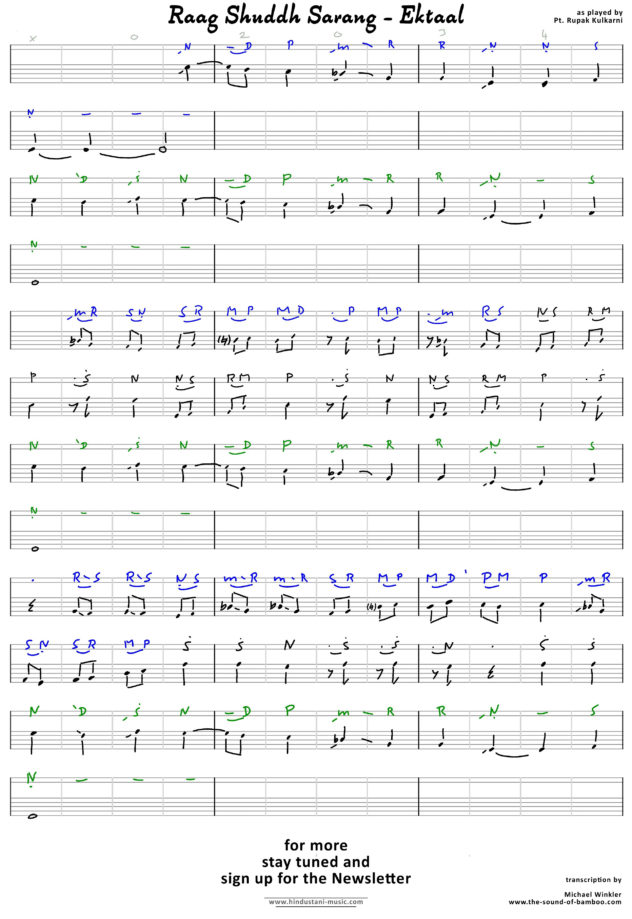